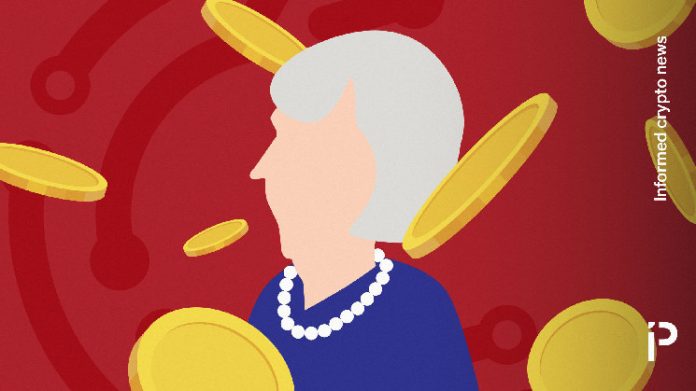 Unfortunately, crypto’s hyperinflationist prognosticators got another prediction wrong. No, the Treasury Secretary will not be instructing the US Mint to forge a $1 trillion coin.

During an interview with the Wall Street Journal (WSJ), Secretary Janet Yellen formally denied rumors, explained why the Federal Reserve wouldn’t purchase it, and called the hypothetical item a gimmick.

Of course, the idea of the Federal Reserve purchasing a one-of-a-kind coin from the Treasury is rather old. Minting an ultra-high-value coin is an idea that’s been bouncing around for decades. Indeed, a professor at Yale proposed the $1 trillion figure as early as 2011. Similar proposals were widely discussed in 2013.

Yellen says the Treasury has already taken steps to deal with the federal government’s debt limit, which hit its perennial ceiling on January 19. The Federal Reserve has the authority to buy a variety of assets, including federal debts and physical coinage. However, it resumed quantitative tightening by pausing its federal debt buybacks in March 2022 in an attempt to combat high inflation.

Although it sounds like a bizarre idea to residents of most developed countries, it’s customary for most of the US government to shut down unexpectedly while Congress debates the federal debt ceiling. Occasionally, government operations temporarily pause while Congress and the White House debate the annual budget.

Periodically, intellectuals propose exotic ideas for avoiding these shutdowns. One suggestion includes invoking the US Constitution’s 14th amendment in order to bypass Congressional deliberation. According to the amendment, “The validity of the public debt of the United States, authorized by law, including debts incurred for payment of pensions and bounties for services in suppressing insurrection or rebellion, shall not be questioned.”

Theoretically, the 14th amendment gives the president the authority to pay off federal debt regardless of the debt ceiling. In practice, the president has never invoked this clause, deferring instead to congressional deliberation.

Although its processes are messy, Congress consistently finds a resolution to the debt ceiling. Legislators have raised or otherwise modified the debt limit at least 78 times since 1960.

Executive administrations throughout US history have hesitated to invoke the legislative-bypass authority of the 14th amendment, which some fear could end with critics questioning the independence of the Federal Reserve or even the branches of government. Indeed, Barack Obama declined to solve the problem with such a one-off action, despite several proposals during his term.

More recently, Joe Biden similarly downplayed the idea when it was revived in September 2021. Renewing that pledge in 2023, current treasury secretary Janet Yellen isn’t entertaining the idea of a $1 trillion coin. Again, academics floated the technicality as far back as 2011. It just doesn’t seem to be a desirable solution.

While hyperinflation scaremongers focused on exotic solutions to debt like trillion-dollar coins and sovereign crypto adoption, the Federal Reserve has focused on more realistic responses to the crypto industry. One of its initiatives, FedNow, undermines many of the value propositions of crypto and is due for imminent release.

The Federal Reserve’s FedNow program could launch as early as July 2023. The pilot release of FedNow has been live since August 2022, promising that it could make payments fast, cheap, and irreversible once confirmed — a common selling point for digital currencies.

Read more: FedNow is coming next year and the feds hope it’s a crypto killer

The push to have a $1 trillion coin minted highlights one reason digital asset supporters might hesitate to get behind FedNow. FedNow won’t solve inflation because the Federal Reserve can print any number of US dollars whenever it wants to. This function puts the Federal Reserve in opposition to bitcoin’s ‘deflationary in the long run’ feature.

Bitcoin has a 21 million cap baked into its code using regularly scheduled ‘halvings,’ which will eliminate the baseline reward for mining a block around 2,140.

Yellen’s reference to a $1 trillion coin as a “gimmick” might be the closest she comes to expressing annoyance with possible interference with the Federal Reserve. Even presidents like Biden and Obama seemed skeptical of the idea.