HomeNewsAnalyticsTheir Issuers Went Bankrupt, but These Tokens Have Survived
NewsAnalytics

Their Issuers Went Bankrupt, but These Tokens Have Survived 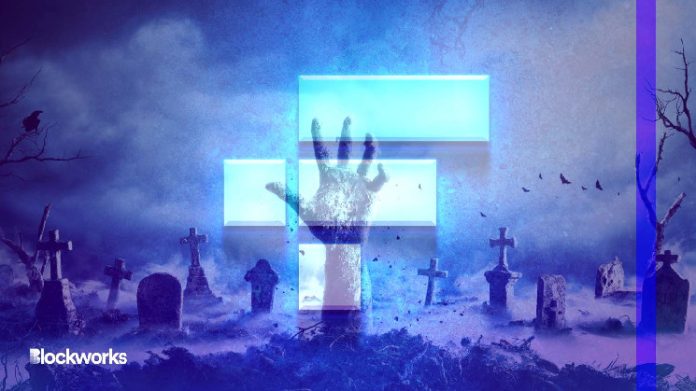 The recent resilience of so-called zombie tokens — coins that have risen from the dead after the collapse of their issuers — have shocked crypto traders of late.

The native tokens of Voyager, Luna, FTX and Celsius have now each outlived their troubled crypto parent companies.

FTX’s FTT is back from the dead, up nearly 150% since the start of the year. And Voyager’s in-house token VGX has rallied more than 40% over the same period.

Terra Classic (LUNC) — a separate token from the issuer’s algorithmic stablecoin that collapsed last May — has clocked a more than 20% increase since the first of the year. Celsius’ native CEL has rallied around 40% in 2023, despite its bankrupt issuer.

“You saw this with equities like GameStop…over the last couple of years, so it isn’t exclusive to digital assets,” Tabatabai told Blockworks in a statement.

Crypto volatility is nothing new, but with fewer exchanges facilitating spiking transactions, analysts are wondering who the buyers are.

“By now, we are used to seemingly dead crypto assets experiencing a quick bout of volatility, but we had a bigger question: who is still market making for the FTT token?” Kaiko analysts wrote in a recent research note. “The amount of risk is immense, and we can be sure that there are very few firms left willing to touch anything remotely related to FTX.”

FTT’s low trading volume — which dropped off a cliff when the exchange went under — and its dried-up liquidity has primed the token to rally, but there’s no evidence the run is set to be sustainable, according to the Kaiko analysts.

When it comes to market depth for the tandem trading pair of FTT and Binance’s BUSD pair, there was only a slight increase in the amount of FTT supplied to its order book, according to Kaiko. That’s despite a large increase in price.

Through Tuesday morning in New York, the equivalent of just $160,000 FTT lies with 2% of the mid-price, the average amount between buyers and sellers, the report added.

“In our markets, we look more at perpetual swap rates, but the dynamic is much the same,” Tabatabai said. “Add in a general worsening of liquidity through a withdrawal of market makers and capital, and the likelihood for short squeezes such as the ones we are seeing in these assets will be increased.”

As interest has surged in the native token of Celsius, the bankrupt lender is considering issuing a new token in order to make creditors whole, Celsius said in court Tuesday. The potential move would fall in line with previous maneuvers by Bitfinex, an exchange that issued tokens to customers victimized by a hack.

Celsius’ plan would first have to go through a vote from creditors — including customers with funds locked on its platform — but the company’s bankruptcy judge would ultimately make the final decision.